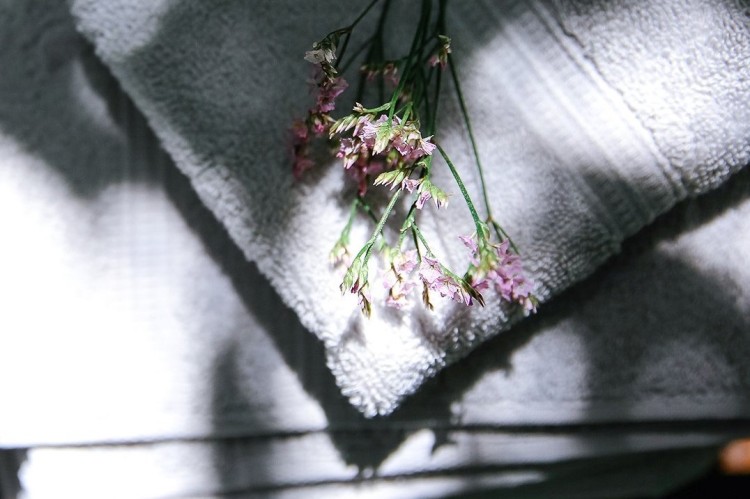 After the kitchen the bathroom is where most people make sustainable living changes, switching to bamboo toothbrushes, recycled toilet paper and homemade toothpaste. Here’s a guide to some ways you can reduce your carbon footprint in this most sacred of spaces.

Nothing mentioned in this post has been sponsored. It’s all just my own personal opinion. If you like your bloggers to remain independent then please share this post or support me with a small monthly donation via Patreon or with a one-time donation via Paypal.

I tried bamboo toothbrushes but couldn’t cope with the sensation of wood in my mouth so switched back to the electric toothbrush I had. A reader mentioned a new type of toothbrush to me recently that you might be interested in. It’s called Source and it’s by the company Radius. The toothbrush’s handle is made from recycled plastic and comes with a replaceable head made from plant-based plastic, which I’ve been told lasts much longer than standard toothbrush heads, i.e. more than 6 months. At the moment it can only be bought via Amazon, from the US but maybe that’ll change.

I tried a myriad of recipes for DIY toothpaste but all of them my mouth feeling unclean and with a nasty after taste. I recently came across one that doesn’t make me gag. I’m in the process of tweaking it and I’ll publish the recipe once I’m happy with it.  I tried toothpaste tablets and biodegradable floss but really didn’t like either and couldn’t bear the sensation of the floss.

On the issue of toilet paper we’ve started to buy recycled toilet paper, either in Lidl or Tescos. I had been steering clear of it because of it’s contamination with BPA, but studies have shown that the BPA content in recycled toilet paper is only micrograms per gram, so we’ve decided in the interest of the planet it’s a low enough risk to justify the switch.

Just to give you a bit of background on BPA. Most people aren’t aware that thermal receipts are coated with this known hormone disruptor, or that thermal receipts aren’t recyclable, and so it frequently ends up in people’s green bins. BPA is a very persistent chemical with studies showing elevated BPA levels were found in the urine of cashiers almost a week after handling coated receipts.

Fixtures and Fittings
The most impact you can have in terms of sustainability in bathrooms is the amount of water you can save.  It makes complete sense for us to be using grey water (water from washing machines and showers) to flush our toilets but best of luck finding a plumber out there who knows how to do this, particularly in an existing house. So we can only do our best with fixtures and fittings that help us reduce our water usage.

The Toilet – When choosing a toilet (or WC in architecture speak) choose one with a dual flush that allows you to use the least amount of water necessary for the job. I’m very tempted to invest in a retrofitted bidet fitting for the toilet like the one from the aptly named bumgun! Not only will it save on single-use toilet paper I think it’s more hygienic too. Alternative designs that works inside the bowl like that from Boss Bidet are available too.

Another way to save water usage when choosing a toilet is to go with one that combines the cistern with the sink, like this one by Spanish company Roca. There are a few retailers of Roca in Ireland so just Google the name Roca and Ireland.

Taps – Apart from tips like not leaving the tap running when you’re washing your teeth, or catching water as you run it hot or cold to reuse instead of fresh water tap aerator make water go further by mixing it with air. Most modern taps come with aerators but you can buy separate aerators if you need them.

Showers – Rainfall type shower heads emit a huge amount of water when they’re used so be mindful of how long you spend under them or switch to a water-saving version.

If you’re currently using an immersion to heat your showers consider switching to an electric shower. When you think about it most people put their immersion on for 20-30 mins before having a shower, whereas an electric shower will only be on for 4-5 minutes so it’s far more efficient.

Tiles – There’s very few options when it comes to sustainable finishes for bathrooms. I did manage to find a few brands of tiles that have received an Ecocert, including some from Porcelanosa, a brand stocked by Tilestyle in Dublin 24. The company would have received an Ecocert for their products by demonstrating a reduced impact of extraction on habitats and natural resources, reduced energy consumption of production processes, improved consumer information and waste management and less packaging.

There are two more ‘green-ish’ options to consider when considering flooring finishes. I say green-ish because, although processed with chemicals they are made from a renewable plant source and not oil.

Linoleum – This is a product made from linseed oil and flax, which are renewable and will grow back within 10 years. It is also said to biodegradable although, give the colour of it and the fact that it’s treated with synthetic chemicals, I’d be keen to know about any toxins left in the soil after it has broken down. One of the makers of linoleum, Forbo, recycle offcuts of their linoleum product (Marmoleum) back into the product. I asked the supplier of Marmoleum in Ireland for results of their test into the biodegradability of their product but they stopped answering my emails when I asked for test results. I did however find a webpage that stated that Forbo’s Marmoleum 2.5mm is now independently EPD confirmed as CO2 neutral, without the need for carbon offsetting. In simple terms, this means that the CO2 produced in the extraction, transportation and manufacturing process of Marmoleum 2.5mm is balanced by the removal of CO2 through the growing of its natural ingredients such as flax, jute and rosin.

Cork Flooring – This material is made by harvested cork by hand when the tree is 25 years old and then every 9 years leaving the tree undamaged and able to grow new bark. It is a renewable material which helps sustain the economy of rural Portugal, where the trees grow. Like linoleum it’s unclear if the final product, which is typically coated with plastic, is biodegradable. Again I emailed an Irish supplier but they failed to respond.

Vinyl Flooring – is made from PVC and so doesn’t spring to mind when you think of eco-floors, but the vinyl flooring manufacturer Tarkett now has a range called IQ Natural that is partly made with plant-based plastic, is fully recyclable and is made with renewable energy in Sweden. As far as I’m aware they’re not taking back vinyl for recycling in Ireland. 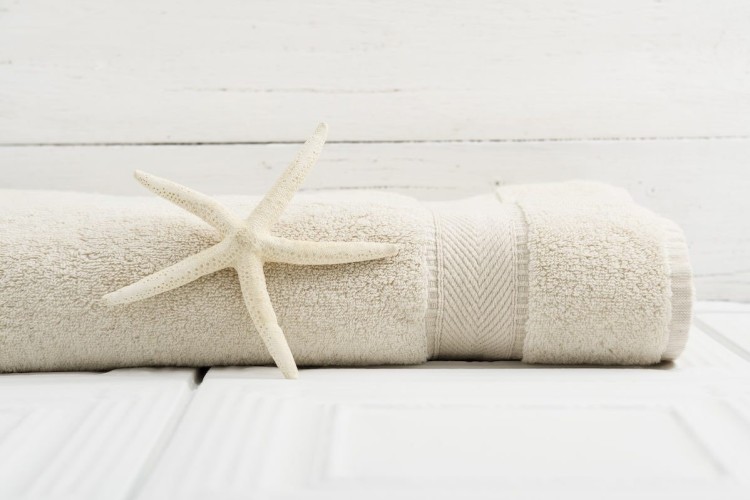 The most obvious regular purchase for a bathroom, apart from toiletries, is going to be towels – although we’ve managed to get a good 20 years out of ours, and as I’ve said before for all new items, only buy if you absolutely need to. Also consider buying smaller towels. We’ve switched from bath towels to hand towels, which cuts down laundry dramatically.

Quite a few eco shops sell bamboo towels but I’ve decided not to list them. Although bamboo is a fast growing renewable crop and doesn’t require as much land, pesticides or water as cotton, it’s conversion of the bamboo plant to fabric is a dirty business chemically speaking and the end result isn’t biodegradable. I know some people will argue that the water demands of cotton makes it unsustainable and if you’re only getting a few years out of your towels I’d agree but I would expect quality towels to last 15-20 years and so spread over this life-span I feel that the water required to grow the cotton is reasonable.

I also love the fact that you can simply put a 100% cotton towel in the composter at the end of it’s life. If I had more faith in recycling I would suggest putting it in a clothes bin so it can be made into new fabric, but honestly when did you last see something for sale made out of recycled cotton.

If you’re towels are getting to the end of their life. Here’s where you can source your next set of towels from, just remember to check that they’re certified, otherwise they may not be genuinely organic.

I simply adore the tactile nature of wooden light pulls especially if made from sustainably grown Irish wood like these Irish yew ones by Brendan Bannon Woodturning or these lovely wooden light pulls, made in the UK and finished with natural oils, from Dojo Eco in the UK.

The Swedish brand Irish Hantwerk make a range of cleaning tools, including personal cleaning tools, from sustainable grown timber, metal and / or natural fibres. From it’s foundation in the late 1900s every brush is made by hand by visually impaired craftsmen. 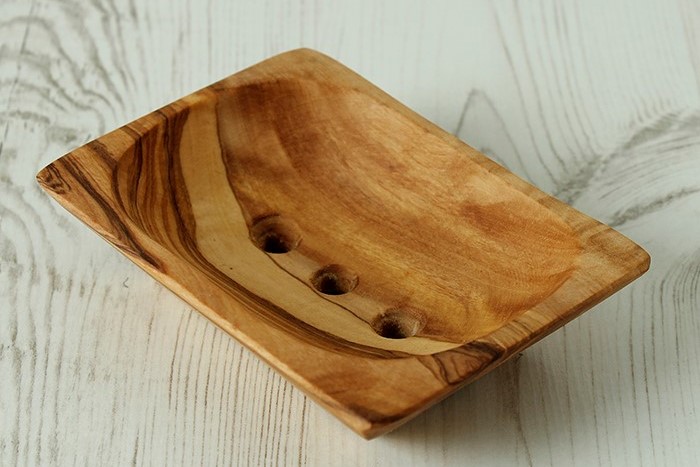 One of the easiest zero waste switches is from liquid soap to soap bars, but what to rest them on? Some people use an upturned nailbrush or loofah but one of the cutest, options I’ve seen is a flat pebble from the beach but I’ve kids so this would never work in my house. Ceramic soap dishes are readily available in most stores but I’ve a preference for wood or stone. I’ve tested quite a few wooden soap dishes and it’s hard to get one that doesn’t blacken quickly. In my experience the cheaper ones, typically made from bamboo, go black very quickly, which makes them very unsustainable. I bought one from IKEA and it went black in a matter or weeks. Here are some lovely ones that I found online along with one that looks very like one I got a year ago as a present, which is lasting very well (check out Reuzi link below).

If you prefer liquid soap, don’t worry, I’ve given an easy peasy recipe for making liquid soap from a bar here.

I am a reformed interior architect that now campaign for and write about sustainable living in Ireland. View more posts

This site uses Akismet to reduce spam. Learn how your comment data is processed.